If you’re new to 3D, or looking for adding DAZ Studio to your existing pipe line, then I’m about to share with you why DAZ Studio is the best free 3D software out there and how you can start making stunning 3D art, right now…

There are lots of great and wonderful 3D applications on the market. And I mean a lot. It´s a jungle out there!
You have 3D Max, Lightwave, Vue, Poser, Carrara, Cinema 4D, Blender, Maya, SoftImage and TrueSpace just to mention a few.

I often get emails from 3D artists wondering what 3D software they should choose. Of course, this is a matter of taste and personal needs. But there is a particular 3D software I usually recommend, to someone that´s just starting off in 3D.

First, what is a 3D Software?

We have 3D modellers, which enable you to create your own 3D models, such as characters, buildings and vehicles. This part of 3D is called modelling – and could be referred to as sculpting or molding in the real world.

Next, we have 3D software that enable you to create scenes, which simply means adding various 3D models, camera and lighting to create a specific scenario, mood or tell a story. See this as a real world studio, where you place your actors and props, set the light and place your cameras. We could also call this step as directing. Ready to use 3D models, or props are often referred to as 3D content.

And finally, we´ve got 3D render software, that take your scene – and make a render or animation – which simply means calculating the final 2D image from the 3D scene as we´re used to see it in blockbuster movies such as Terminator Salvation or Titanic. We could refer to this step as developing the film you´ve taken with your camera – allthough it´s digital and not the old stlye film you would develop in a red room.

On top of this, we have some smaller 3D software packages that enable various tasks, such as texturing. In the real world we could call texturing as painting various props / actors in differnt colors / patterns to alter their look. And we have smaller application that cover a segment called UV mapping. This would be telling the painter where to paint and how to paint the colors and patterns onto the models. There´s more to this, but we don´t want to get in to that as this point.

Most 3D applications on the market out there, have various parts implemented or left out. Some can be upgraded, while other rely on other 3D software packages to be “complete”. For instance, Lightwave, which I´ve persoally been using since 1999, includes all of the above parts in a single package. It´s a wonderful software, but it comes at a steap price level. The trial version is limited in use as well.

You have the amazing Vue, which truly is state of the art when it comes to digital nature. I´ve been using Vue since 2008 and all I can say is wow. The trial version is free, but has some limitations in use and does not include a modeller.

We could go on forever, so let me get to the point. Lightwave and Vue are high end 3D packages. They are made for pro´s, that want to create professional results. The price that comes with such advanced software, besides the cash – is the steap learning curve. And then some too! They have so many features, so incredibly advanced tools – that it takes a lot of time and effort to learn and understand them all. While this may sound good on one side – a huge problem with all this is that since they are so advanced – they often miss the basics.

DAZ Studio, starts where you are…

To learn the basics, you don´t need a 3D software used in a Hollywood production. Frankly, you don´t want to use that to start with, as the high end 3D applications are so powerful, that they simply skip the basics. You are given a giant, that makes giant tasks. That won´t teach you the basics. Why would you need the basics then? Why walk when you can drive a car? Well, what happens when the car breaks down? Or when you get stuck in a traffic jam? See the point? What happens when you´re running this giant and hit a problem that needs to work real fast, and you simply can´t use the giant as it takes hours to finish? That´s the whole point of learning the basics. Cool features are great, but will not always be the best solution. Sometimes, a basic and really quick solution will simply beat the giant. It depends on the situation. Anyhow – walking is a good skill to know! And therefore, the basics are a very important step in your 3D journey.

I often stumble across artists that hop into the advanced 3D packages out there, or are even encouraged by others to use them. Don´t do that. Make it simple. We want to learn to walk before we run. I mean, you wouldn´t learn to drive a car sitting in a Ferarri? Yeah, it´s a nice car – but it´s too advanced. It´s made for pro´s that can handle the torque and hourse power.

DAZ Studio not only gives you a perfect starting place, it will accompany and impress you for years to come…

With that said, there are tons of less advanced 3D applications out there. You can get really good ones for under $150. To make the selection easier, I´ve included some specific points I think are very important when choosing the right 3D software.

1. It needs to be free, with unrestricted use
Why is that? Well, why would you want to spend $150 on a software, when you can have one for free? Now, some 3D applications have trial versions that are limited. Some does not limit the usage, but instead limit the trial time. You don´t want any of that. You want a free application that is 100% unrestricted – forever. Upgrading should be your choice, not someone elses!

3. You want the 3D software to have a really outstanding user interface

I don´t want to step on any toes, but boy there are some crappy designed 3D applications out there! I´ve screamed and pulled my hair several times when using several of them. Stay away from anything that´s difficult to use, as it will only frustrate you! Remember, this is your vehicle for YEARS to come. You want to sit comfortably! You want to be able to get access to all the parts easily, with a large – easy to view / use interface. And you want to be able to customize it to your advantage.

DAZ Studio has a big and clear user interface, that can be easily customized to your taste. Out of all the 3D applications I’ve been using through out the years, DAZ Studio is the most simple one. Period.

4. You want to have access to a HUGE community

This is important. Very important. You don´t want a software that 273 others have. Get one that hundred´s of thousands use – and share their experiences on a free forum. There´s really no price tag to this. A community, a place to land is cruital. This adds so much value, so much bonding and fun – that I really can´t urge the importance of this step. DAZ Studio has a fantastic and dedicated community that is growing fast.

Now, here´s where the fun starts! If you get your free software, you really don´t want to spend $150 on getting some ready made content just to get started! You want to use lots of free content. And you want to be able to buy extra high quality content very cheap. Why is that? Simply because as an 3D artist, you will want to use LOTS of it. And I mean LOTS of it. Some day you want to make a render of a car. The day after you wan´t to have a girl sitting in that car. And the day after, you want a giant T-rez hunting that poor lady. The following week, you want a helicopter squadron making suhi out of that T-rex… Your imagination is vivid – so you need a market place that can feed and inspire your muse!

Because of its massive community, you will never run out of DAZ Studio props and adds ons. There’s lots of free stuff as well as low price point and higher price point extras – for every corner of your imagination.

6. You want your software to stay with you for years to come.

You want to keep using it even when you hit the intermediate level. You don´t want to change your software every year, because you grow out of it! It´s important that you can upgrade your software, get additional plug ins and add ons – as you grow.

7. Lastly, you want to be able to create and sell your own content.

Maybe you want some extra cash? Or want to make a living, like I do. With the extra possibility to create and sell your content – your 3D journey can take a very versatile route.

DAZ Studio from DAZ 3D simply has it all! I´ve been using it since the early beta versions in 2005 – and it was love at first sight! It has grown into a wonderful 3D sofware, with great features that will keep beginner´s in awe – and even intermediate users busy. It suits beginner´s since it ´s so easy to use, has the best user interface in the world – and really the best Open GL (live) preview in the industry. This is a huge help when you work with your scenes, as the software truly gives an excellent preview before you render. It´s run by some wonderful people, whom I´ve come to know very close over the years. They truly care about DAZ Studio, their market place / forum – and their customers. If I were to start over from day 1 – I would choose DAZ Studio. Period.

DAZ Studio doesn´t come with a built in modeller, like Lightwave does. This may seem like a down side, but really it´s not. I strongly recommend focusing on having fun – and you don´t need 1001 tools for that. With DAZ Studio you can be doing your first renders in minutes.

Go to www.daz3d.com, register for free – and download their software. It comes with some preinstalled content, so you don´t really need to buy anything to get started.

Wanna create stunning 3D art today? Then get your hands on the industry leading DAZ Studio 3D training HERE. We’ll guide you right from the start to where you want to be… And we’ve done it with thousands of artists since 2007…

Happy rendering and welcome to the world of 3D!

And that’s it, that’s why DAZ Studio simply is the best free 3D software out there… 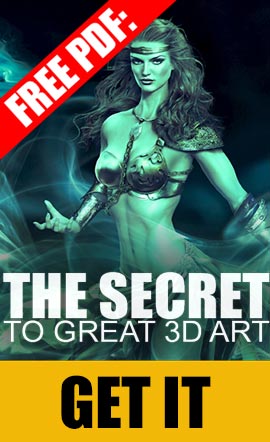